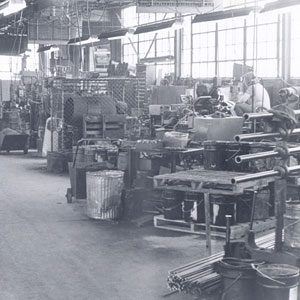 During the four years after Pearl Harbor in December 1941, Wolverine Machine Products produced screw machine products which were used in the United States’ war effort. During this time, more than fifty production workers worked seven days a week, 24 hours per day.

Charles Walker, Mr. O’Neill’s nephew and successor as president began working for his uncle in 1942. After graduating from Michigan State College (Now MSU) in 1937, Charles worked for Sears & Roebuck in Chicago as a buyer for five years. He recalled that the shop was crowded, dirty and very noisy during the war years. Wolverine Machine continued to prosper as the domestic automotive industry grew when automobile production resumed and grew with the pent-up demand for new autos. There were no automobiles produced in the United States from 1942 until late 1945.